Here it is.  The money shot.  It’s taken a better shape since this shot, but I felt I needed to cover my eyes because I got Anne Maried.  Y’know, like those people that end up on the “What not to wear” things in magazines, and they put a black bar over their eyes?  That’s how I feel I should be portrayed.  Although this shot is more the STYLE than the cut itself, it portrays the sheer horror of what I look like these days.  Oh, better days, when my hair came to my ears in a non-mullet way.  Oh, the days when I wasn’t forced into Lee jeans and Arizona polos.  (Insert appropriate apology for anyone reading this sporting either of those – they’re great!  I wear them too!) 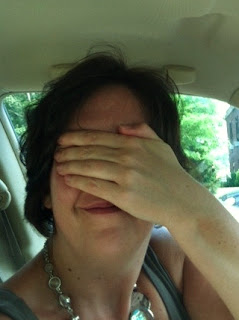 Admit it.  If you’re still here, if you didn’t shudder, close the post and go back to looking at facebook and pretty pictures of your other friends that (smartly) post the best shots they took of themselves and their families, if you are not REDRUM scared of this post, admit, this is a pretty bad haircut.

Anyway as this was the kick off to the birthday, I think two things: One, it’s completely understandable that in the weeks following, bad fortune ensued.  Two, the birthday needs to be kicked off again.

One, a summary of bad fortune ensuing

First – Anna’s fish died (Goodbye Tuna) and she (incorrectly) assumed that I buried it with Fluffy (the dead blue jay + his family).  She then sang a little song to the burial site.

Then, my bed broke.  Yah, you’re funny, but it just broke.  My (amazing) father built it for me, and I assume measured it slightly incorrectly to a queen mattress, so when I finally bought a mattress to fit the frame, it did not fit, and let’s just say it was a slow, grueling process of accepting the fact that it was falling apart – coupled with my unbelievable lack of handiness that has led it to the basement to live there until golf season is over.  (Don’t tell my father, he is golfing, and I don’t want him to worry about it and speed down here to fix it).  ((Seriously, don’t tell him.  That means you Marlaine))

Then, Banana decided that the basement door needed to be locked because there are monsters down there and she didn’t want them to escape.  She didn’t tell me about this genius plan.  Are there monsters down there?  Probably.  Maybe.  But more importantly, what is definitely down there?  Butterball’s litter box. In a somewhat brilliant response to her secretly hatched plan, Butterball decided her mattress looked very similar to his litter box.  After 5 different cleaning products and two weeks of attempting to get the mattress clean, I have given up, and it’s now residing next to the broken bed (Seriously Marlaine!) in the basement until the big-stuff-pick-up-day for Newton.

This combination of lovely has resulted in Banana and I sleeping together, on the floor of my room.  It’s very minimalist.  Very bohemian.  Very attachment parenting.  Very natural family living lifestyle.  Very fucking low to the ground.

Side but important note – my running attempts continue, and because I did not eeeease into it (my super athlete coworker tells me) I have hip problems right now, and can’t get up easily.  Which is fantastic when you’re sleeping 8 inches off the floor every night.

Am I deserving of more than one birthday?  No.  I am an incredibly lucky (now) 34 year old woman living in a lovely apartment with my kick ass 6 year old that I adore more than anything, a job that I love, a great (albeit not all that handy) supportive family, funny, smart, beautiful inside and out friends, and can financially support myself.  I am luckier than I ever thought possible.  But for that reason – because I get it, I think I can kick it off again.

I haven’t decided how or when just yet.  But it’ll be grand.  And my hair, no worries, will look FABULOUS.