Banana doesn’t believe you’re on vacation unless you go somewhere where you sleep over, so although I thought she had an amazing vacation, she, in fact, thinks we took a trip or two, but mostly she was at camp.  I feel as though I’m finally back in our routine enough to talk about what I would define, as a fabulous summer.

We roasted marshmellows on the back porch with my fancy new portable grill.  Sure, normally, it’s around a fire, but the end result of the marshmellow was right on.  Especially with some white wine. 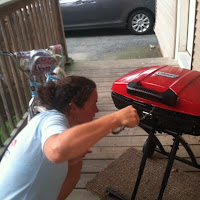 Nathan and Anna got to illegally ride in the back of my father’s truck when we were at my parents.  In case you’re wondering what my father is saying in this picture, it’s something along the lines of “IF THEY FALL OUT THEN IT’S NOT MY RESPONSIBILITY ERIN.  SIT DOWN ANNA!!!!!” (Hey Amy, Nathan rode in the back of Dad’s truck illegally.  Hope that’s cool with you.)

Banana went to Art Camp, and made fabulous, fabulous, fabulous things.  I’m posting this one because she brought it to my folks house with pride, and in response to this one, my mom said “Look VIO, she made TOAST!!!” 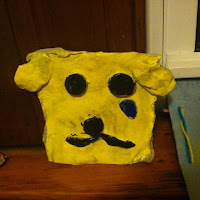 We traveled by train…around the mall!  But there were puppies there, and since not many folks ride the train around the inside of the Liberty Tree Mall, they treated Banana and my aunt like CELEBRITIES.  Or, crazy people on a train in the mall.  Either way, it was good times. 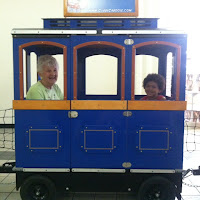 We went hiking!  The kids LOOOOVED it.  They were all “Let’s hike EVERY DAY ALL DAY!”. 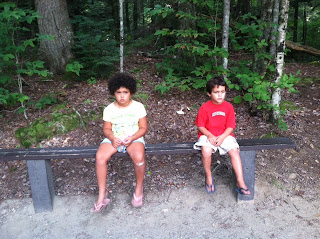 And to cap the summer, we stayed in a lovely, lovely cabin in Northern NH for a few days.  It was beautiful, serene, and relaxing….until I had to take a shower.  I should have posed next to the shower head, so you could see that the shower head is only 4 feet from the ground.  I am 5 feet, 8 inches.  Yah.  Who is 4 feet?  Or rather, who is 3’5″ and therefore can comfortably shower with a shower head 4 feet off the ground?  Not me.  So I had to pretend I was SITTING – you know those horrible wall sitting excercises you do – that’s what I did, with my back up against the shower wall.  I’m sure it was germ free, being a cabin in Northern NH.  I was totally comfortable with the entire experience.  As was Anna, who showered by sitting on the ground.  Yah. 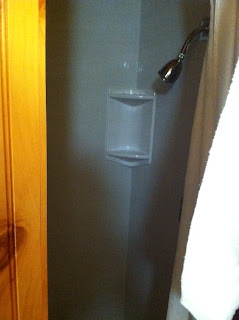 It was a summer that I’ll remember when I’m 90, as one of my favorite summers.  I love my baby girl.  I know I’ll remember it when I’m 90 because I had my palm read mid summer and she told me I wasn’t dying until at least my mid-nineties.  She also told me that I would meet my soul mate pretty soon….in church.  So perhaps the palm reader was my mom disguised as a 75 year old Italian woman. Either way, I will remember her, along with the rest of my family, as being part of one of my favorite summers.