I have no idea when you’re supposed to let your child wander off in a store without you.  I also know that from my “mother education” from my own mother, that time is never, especially in Massachusetts.  If you’re in New Hampshire, apparently you drop your little 6 year old at the mall for the afternoon and relax.  In Massachusetts, you must LEASH THEM UP to make sure they are always with you.  The first time I went to Boston (that my mother knew about) with my friends, I think I was 17, and this is the talk I got from my parents about driving on route 1 (because we were going to the square one mall – hooray!)

Linda: You don’t stop at your McDonald’s, your gas stations, your convenience stores on your way down there.
Me: Why?
Linda: That’s where you get your rapes, your murders, and your muggings.  I’M SERIOUS ERIN.

Of course, like a proper 17 year old, I quickly dismissed my mother’s advice, because as far as I could remember, the last time she drove into Boston was in the early 1960’s.

Last week we were at the Texas Roadhouse in Danvers, and Banana wanted to go to the bathroom, and I weighed whether or not I would go with her for a second, and I thought my mother and aunt were going to have a heart attack.  If we’re in a restaurant where I can see the bathroom – because it’s close enough to me, and it’s relatively small – I let her go.  Maybe all you other mothers of 6 year old girls are falling over in your chairs right now, I have no idea.  I don’t know what the right age is.  Maybe it’s 12.  This is on the list of things that makes it insane that you don’t have to go through some rigorous testing before you’re able to have a child – who is letting me foster this poor little girl in the world?  Man.  But the reasoning behind the pending heart attack from my mom was only, “Erin, we’re in MASSACHUSETTS!!!”  A few years ago my mother took Banana to the bathroom in a McDonald’s in New Hampshire and left my very young nephew with two strangers who “seemed really nice and had relatives from Berlin” because he didn’t want to leave his fries.  Yah.  Don’t make him stop eating.  As long as he’s in New Hampshire.

I have done my best to let go of the brainwashing from my parents on the evils of Massachusetts, but it’s not all gone.  I do think New Hampshire, and Maine actually, are better places to live.  I can’t base this on anything.  Taxes?  Rude, unfriendly people, maybe?  I suppose both of these things exist in New Hampshire and Maine, but this is deeply ingrained prejudice that I am trying to battle.  And it doesn’t just come from my mother, it’s a statewide epidemic.  New Hampshire does not like Massachusetts.  Vermont doesn’t like New Hampshire.  Maine likes everyone.  And Massachusetts is too self absorbed to realize there’s another state besides New York.

I’ve been weighing each situation with Banana individually – can I see the restroom, are there tons of people here, can I drop and run if there’s an emergency – whatever, and for the most part, trying to let her go off on her own.  Part of this is because I know she thinks it’s exciting, it’s helping her be more independent, and part of this is because I’m fine not visiting every public bathroom in New England.

Yesterday, we were in Target.  I was no less than 5 feet from the bathroom, checking out.  She asked if she could go to the bathroom.  I was almost at the point that the last bag was being filled.  I said fine.  I watched her walk over a little absentmindedly, and paid.  And about 4 minutes later, watched her peek out of the door, holding it, and looking up at me, and wondering why my face was drained of color. 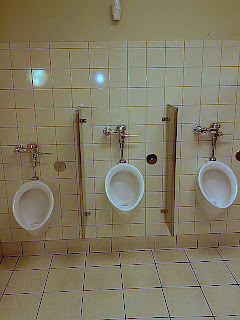